A sneak preview of what’s going in Tracking the News next month, including details of the next walk and cider apple picking…

The August event took place from Home Farm, by kind invitation of the Lawrence family. 17 walkers checked out more of the history of Allensmore Court before crossing the railway line safely and looking back over Allensmore. More history was discussed as we passed the old cottage at Coedmore and returned for a 5.00pm barbecue. The rain threatened and tried to spoil the party, but nobody was disturbed by a damp dessert. As the sun returned and the children entertained visitors, more of the local juice was consumed. Many thanks to everyone for their help and support – £259 was raised towards the upkeep of St Andrew’s Church.

The September Ramble & Barbecue starts at Lower Mawfield Courtyard, HR2 9BQ on Saturday 7th September at 3.00pm. Please join us for the walk and/or the refreshments at 5.00pm.

A quarter peal was rung on the bells at St Andrew’s Church during “Quarter Peal” fortnight. The quarter peal was successfully completed on Wednesday 31st July and was dedicated to the memory of Val Price.

Photographs of Allensmore have been trickling in for the 2020 calendar. Please can we have all photographs with Carol Williams of Inkerman, Allensmore (churchangel@icloud.com) by Sunday 15th September.

The annual celebration of the harvest will take place at St Andrew’s Church on Thursday 26th September at 7.30pm. The service will be followed by light refreshments.

The picking of the cider apples will take place on Saturday 12th October  at Inkerman, starting at 2.00pm. The juice from these apples will then be used for next year’s liquid refreshment at village events.

This small team led by Wade Bostock have had several meetings and have also had productive discussions with representatives of Balfour Beatty to look at the specific problem of safety on the A465, particularly in the vicinity of the village hall. The meetings with BB have led to us reducing somewhat the expectations of what is practical; for instance, though the idea of localised 20 mph limits in the centre of the three settlements may be an option to explore in the future, a blanket 30 mph across the whole parish and “village gates” on the A465 are unlikely to be effective.

Preliminary suggestions were put to the Parish Council on the 25th of July.  The council have endorsed the work of the group so far and the following specific actions will be pursued by the council with Balfour Beatty:

Another possibility being pursued is to provide signs on the A465 directing large delivery vehicles towards Allensmore Village to use only the northern lane at Webtree.

Reduced speed limit on the A465, in whole or in part, and localised double white lines and other signage on the roadway in the vicinity of the village hall are still being investigated.

Ward Councillor, Christy Bolderson and the police are aware of the progress made and meetings with Christy and Ian Connolly, the police Traffic Management Adviser, are being arranged.

The question of a footpath/cycleway along the A465 is still on our agenda for the future but road safety on the A465 needs to be priority for the moment.

Residents’ security etc is still to be explored. (A shed break in was reported in Cobhall Common just recently!). Our Police support officer (PCSO) has agreed to meet with residents in the Autumn.

Environmental group.  Residents interested in improving our environment held a litter pick on Saturday 6th April, organised by Brigitte Ratcliffe and her small team.  They plan to repeat the exercise next year. A possible spin off from that might well be a team looking at environmental issues more generally in the parish.

The Parochial Church Council met on 9th July and agreed to investigate the options for toilet facilities and a small kitchen at the church.  Both of these could be combined in a project centred on the restoration of the Church Porch.  There should be more to say on this at the Coffee Morning to be held in the Church this coming Saturday, 17th August 10 -12 noon.

This group has had two highly successful events in the village hall and is clearly now well established.  (see latest update from Yvonne Chapman)

10am to 12noon This Saturday August 17th

Please come and enjoy good company with coffee or tea and delicious cakes.

And find out about the ideas we have for renovating the Church Porch and improving facilities in the church.

Following the Allensmore Parish Council’s approval of the draft Neighbourhood Development Plan at their meeting on 23rd May 2019, it was submitted to Herefordshire Council and other “statutory consultees” for formal public consultation under Regulation 14 of the Town and Country Planning, England, Neighbourhood Planning (General) Regulations 2012. The consultation period was from Monday 27th May 2019 to Friday 12th July 2019 – the period being 6 weeks and 5 days.

We had a total of 23 responses, 7 from the statutory consultees and 16 from the public. Here are some key points from the responses:

The majority of public responses were extremely supportive which is very pleasing to report.

Several responses commented on the draft settlement boundaries, suggesting three amendments to extend the boundaries to include land owned by the respondents.

All the responses were discussed at length by the NDP Steering Group at their meeting on July 15th 2019. A couple of minor changes to the NDP were agreed at this meeting:

The Steering Group made a unanimous decision not to enlarge any of the settlement boundaries. There are several reasons for this decision:

A full report of all the responses together with the Steering Group’s considerations is published on the Allensmore Parish Council website www.allensmore.org.uk.

The next stage is to prepare the final version of the NDP and supporting documents for approval by Allensmore Parish Council at their next meeting. It will then be submitted to Herefordshire Council for them to carry out the Regulation 16 Consultation and organise the referendum for local residents.

Although the draft NDP has now completed the Regulation 14 stage and therefore carries some increased importance in planning decisions, it can still be overridden by the Planning Committee.

We are very disappointed that this happened during a recent planning application when a site, deemed unsuitable in the draft NDP (as recommended by our independent assessors AECOM), was given outline planning approval. This was also despite the strong representations of our Parish Council at the decision-making meeting.

This underlines the importance of completing the NDP as soon as the necessary lengthy processes permit and bringing it before residents to ratify in a referendum. Until this happens, the NDP will not have full legal authority when any future planning decisions are made. 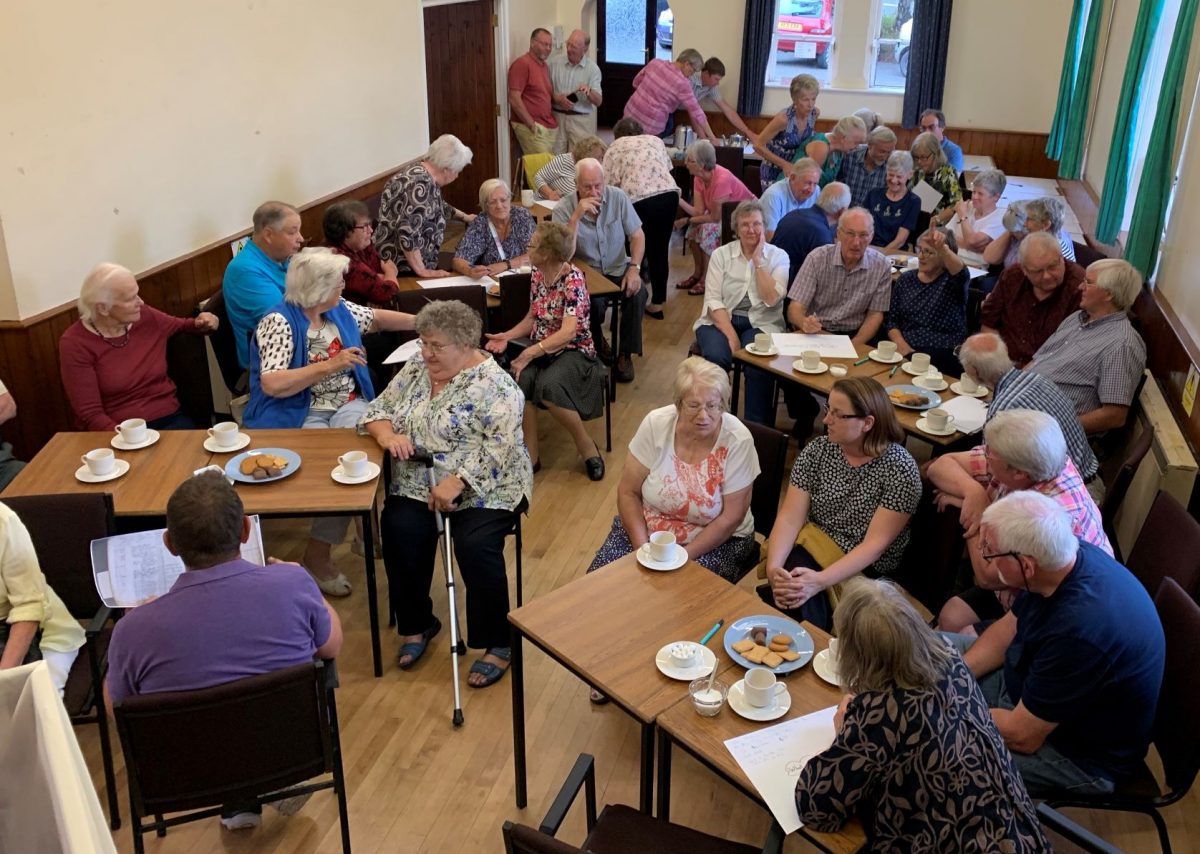 We were delighted that almost fifty people attended the get together last Friday with the main topic of conversation being’ Allensmore Village School’. It was a particular pleasure to welcome thirteen past pupils who shared memories of their school-days in the time before the school closed in April 1957. We traced the journey of education in the village before the ‘Board School’ was built on the site of what is now the village hall; we looked at a copy of the 1870 plans for the current building and thought about how it had changed over the intervening years; finally, we heard what the inspectors had to say about the school in their last report from 1956 (the lack of running water and electricity were noted!) The display of information about the school generated a lot of interest ….. but we are still exploring, so if anyone has any further information or photographs please contact Yvonne Chapman on 01432 806 414. Similarly, if you want to find out about a particular topic of local history, do let us know.

All that talking and listening proved once again to be thirsty work, so we are grateful to the ‘behind the scenes’ crew who materialised with the tea trolley (take a bow – Pam Edwards, Bridgette Ratcliffe, June and Steve Jonigk) and also washed up all that crockery. Thanks also go to Tony Edwards and others too numerous to mention, who helped put the furniture away. Finally, Nick Chapman has been indispensable on the IT and admin front – laminating, scanning and generally doing all the 101 things needed to help make the evening a success. Thank you all!

The weather seems set fair (at the moment!) for August’s Village Walk and BBQ, being held by kind invitation of the Lawrence family  this Saturday, 1st August at 3pm at Home Farm, when the walking starts. The eating starts at 5pm so if you can’t make the walk, that’s the time to turn up with some cash in your pockets to make a donation in return for local produce and the usual liquid refreshment. Proceeds in aid of St Andrew’s.

Regulation 14 consultation is now complete. The feedback and steering group response to the feedback, including minor revisions to the draft plan can be found in the NDP reg 14 section.

Preparation is now underway for the Regulation 16 stage.

Parish Council: The next meeting is at 8pm on Thursday 25th July 2019 at Pateshall Village Hall. The agenda will follow. The minutes of the meeting held on 21st March 2019 are available here.

The draft document has now been prepared for the Regulation 14 Consultation stage which will run from 27th May until 12th July 2019.

We are preparing for the next stage, Regulation 14 which will formally start in a few weeks following assessments by the Neighbourhood development team at Herefordshire council – see here for more details and the latest copy of the draft plan.