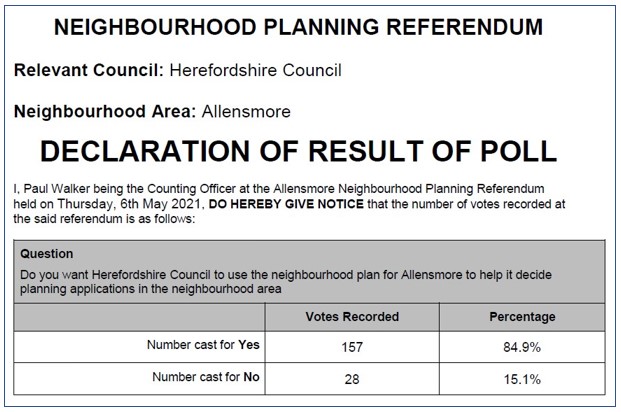 So a large majority of the almost 40% of residents who voted were in favour of the plan.

This means that Herefordshire Council will now be using the NDP to help when deciding on planning applications.

It provides important additional criteria for a development to be accepted by Herefordshire Council Planners, better reflecting the wishes of residents.

The NDP Steering group and the Parish Council are very grateful for the help the residents have provided during the development of the plan and for the support shown at the referendum. 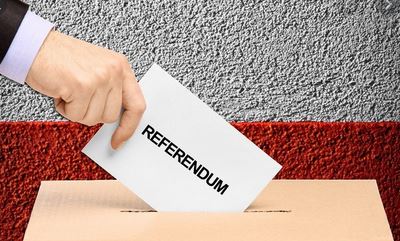 Referendum on the adoption of the Allensmore Neighbourhood plan.

‘Do you want Herefordshire Council to use the Neighbourhood Plan for Allensmore to help it decide planning applications in the neighbourhood area?’

The Allensmore Neighbourhood Development Plan has successfully passed through the examination stage – the last stage before it’s put to a referendum.

The final examiner’s report was received on 23rd March 2020. The report is very positive and she generally suggests changes that either clarify and/or strengthen our policies. The modifications recommended by the Examiner and accepted by Herefordshire Council have been applied to the Allensmore Neighbourhood Development Plan; the latest version of the plan is here.

However, plans for the referendum are on hold during the current Coronavirus situation. Read more here.

The Neighbourhood Development plan has successfully completed the Regulation 16 stage. The consultation period which ran from 7th October until 18th November 2019.

Further details can be seen here.

The steering group has carefully considered the comments received and their responses can be downloaded here.

The plan now proceeds to the Examination Stage – an examiner will be appointed shortly.

This formal part of the process can be followed on the Herefordshire Council website.

Following the approval of the draft Neighbourhood Development Plan by the Allensmore Parish Council at their last meeting on 19th September, the plan has now been submitted to Herefordshire Council for the final (Regulation 16) Consultation, examination and (eventual) referendum..Thank you to everyone who has helped and contributed during the lengthy process to get to this stage!

We have received the following acknowledgement back from Herefordshire Council:

The plan, along with accompanying documents can be viewed at:

Once adopted, this NDP will become a Statutory Development Plan Document the same as the Core Strategy.

All the responses to the most recent consultation (“Regulation 14”) were discussed at the last Steering Group meeting on 19th August and following some small amendments, the documents were submitted to the Parish Council for approval at their next meeting on 19th September. As no matters have arisen since the last meeting, the Steering Group meeting planned for next Monday 16th September will not be required and has been cancelled.

Following the approval by the Parish Council next week, the documents will be submitted to Herefordshire Council for them to complete the final stages before the referendum to seek residents’ formal approval for the draft plan to gain full legal status in future planning decisions.

Following our recent NDP “Regulation 14” consultation (see results on the Parish Council website www.allensmore.org.uk), the Steering Group will be having a meeting next Monday, 19th August. The main agenda item is to sign off the final version of the NDP for the Parish Council to approve at their meeting in September after which we will make the final submission to Herefordshire Council. This will lead to the final stage; a referendum to ask residents if they accept the plan so it is legally binding when planning decisions are made.

Full agenda of the Steering Group meeting is below.

3.0     Open Session: 15 minutes for residents to raise queries regarding the NDP.  Please note: we may not be able to give complete answers on the night.

Following the Allensmore Parish Council’s approval of the draft Neighbourhood Development Plan at their meeting on 23rd May 2019, it was submitted to Herefordshire Council and other “statutory consultees” for formal public consultation under Regulation 14 of the Town and Country Planning, England, Neighbourhood Planning (General) Regulations 2012. The consultation period was from Monday 27th May 2019 to Friday 12th July 2019 – the period being 6 weeks and 5 days.

We had a total of 23 responses, 7 from the statutory consultees and 16 from the public. Here are some key points from the responses:

The majority of public responses were extremely supportive which is very pleasing to report.

Several responses commented on the draft settlement boundaries, suggesting three amendments to extend the boundaries to include land owned by the respondents.

All the responses were discussed at length by the NDP Steering Group at their meeting on July 15th 2019. A couple of minor changes to the NDP were agreed at this meeting:

The Steering Group made a unanimous decision not to enlarge any of the settlement boundaries. There are several reasons for this decision:

A full report of all the responses together with the Steering Group’s considerations is published on the Allensmore Parish Council website www.allensmore.org.uk.

The next stage is to prepare the final version of the NDP and supporting documents for approval by Allensmore Parish Council at their next meeting. It will then be submitted to Herefordshire Council for them to carry out the Regulation 16 Consultation and organise the referendum for local residents.

Although the draft NDP has now completed the Regulation 14 stage and therefore carries some increased importance in planning decisions, it can still be overridden by the Planning Committee.

We are very disappointed that this happened during a recent planning application when a site, deemed unsuitable in the draft NDP (as recommended by our independent assessors AECOM), was given outline planning approval. This was also despite the strong representations of our Parish Council at the decision-making meeting.

This underlines the importance of completing the NDP as soon as the necessary lengthy processes permit and bringing it before residents to ratify in a referendum. Until this happens, the NDP will not have full legal authority when any future planning decisions are made.

Regulation 14 consultation is now complete. The feedback and steering group response to the feedback, including minor revisions to the draft plan can be found in the NDP reg 14 section.

Preparation is now underway for the Regulation 16 stage.

The draft document has now been prepared for the Regulation 14 Consultation stage which will run from 27th May until 12th July 2019.